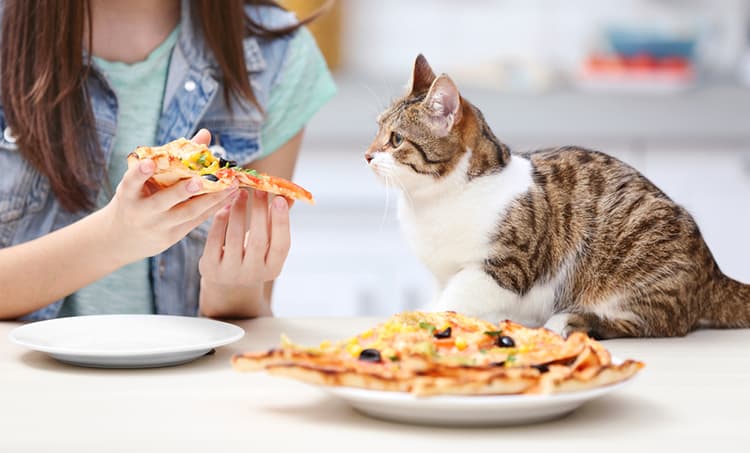 There’s nothing quite like a pizza dripping with hot cheese and meaty toppings. But despite those YouTube videos that have been getting the “clicks,” is allowing our feline friends to indulge in the “za” a good thing?

Can cats eat pizza? Read on…

As a general rule-of-paw, pizza is one of those foods that if your cat were to steal a nibble, it probably wouldn’t do any harm. However, that being said, pizza, in general, is not a healthy snack for a cat.

First off, most animals are lactose intolerant, meaning they lack the ability to break down this ingredient found in all dairy products, including cheese. Too much cheese (and dairy) can lead to stomach upset, diarrhea and vomiting.

Second, the yeast found in pizza dough is another ingredient that most cats have a hard time digesting. Although the occasional tidbit of bread is okay for your pet, the raw dough can cause serious health issues. Even the tiniest bit of raw dough will continue to rise in your cat’s stomach which will cause bloating and a possible blockage.

Third, the sauce itself is a big no-no, in fact, all plants from the nightshade family (including tomatoes) can cause death to a family pet.

And these are just the beginning…

Watch Out for Those Added Toxins

Whether you add it to the pizza itself or it’s in the sauce, both garlic and onions can be toxic to cats. When eaten in large enough quantities your feline could experience damage to his red blood cells which can lead to anemia.

Another unhealthy pizza additive is the processed meats such as pepperoni and bacon. These are high in fat, salt, and grease which could give your pet an upset stomach. Too much of this type of meat could also lead to weight gain and eventual obesity. This, in turn, increases your cat’s chances of getting diabetes and heart disease.

With all the choices we have when it comes to feeding our cats there’s really no need to take the chance with pizza. The cheese, sauce, and meats can all be potentially dangerous and even toxic to a feline’s system, so stick to the kitty kibble to ensure your fur baby stays happy and healthy.