The smallest cat breeds are the the American curl, the Bambino, the Cornish Rex, the Dwelf, the Minskin, the Munchkin and the Singapura. Read on for information on these adorable miniature cats.

This cat breed is one of the youngest to be developed and was actually started by a stray kitten named Shulamith. According to Cattime, this little female kitten not only had long silky fur, but ears that curled backwards. In 1983, cat fanciers began breeding these odd cats to make its own unique breed, the American Curl. Aside from its affectionate personality, this feline only weighs from 5 to 10 pounds fully grown.

If you’ve ever seen a Bambino cat, you most likely will never forget it; this hairless feline resembles an inside out alien! It’s a new breed only making its way into the cat world in 2005. The Bambino is truly one of the more unique breeds and has been described by feline fanciers as “lively and affectionate.” In addition, it has huge upright ears, big eyes and a body that should only grow from 5 to 9 pounds.

If you want the elegance of a dancer with a personality full of love, fun and affection, then the Cornish Rex may be the perfect cat for you. It’s an old breed dating all the way back to 1956 in Cornwall, England. It sports large upright ears and large round eyes. Plus, who can resist that super luxurious curly coat and forever kitten-like antics? In addition to these amazing qualities its long, lean and angular body should only grow from 6 to 10 pounds

This elf-like cat is a new breed and is sure to rise to popularity. According to experts the Dwelf is a cross between a Munchkin cat, the Sphynx and the American Curl, which have all lent their very distinct features to the Dwelf. These include the short legs of the Munchkin, the hairless nature of the Sphynx and the large (slightly) curled ears of the American Curl. In addition to these amazing qualities, this affectionate kitty only weighs up to 9 pounds fully grown. Playful and outgoing, this sweet kitty has only been in existence since 1998. The Minskin is a hairless breed with large eyes and ears and short legs. Its lack of fur makes it very warm to the touch, which is great for those with cold or arthritic hands. In addition, this little character is very people-orientated and wants to be involved in its family. Is it small? Indeed, the Minskin only grows to approximately 5 pounds.

By Paulmcsorley [GFDL or CC BY-SA 3.0], via Wikimedia Commons 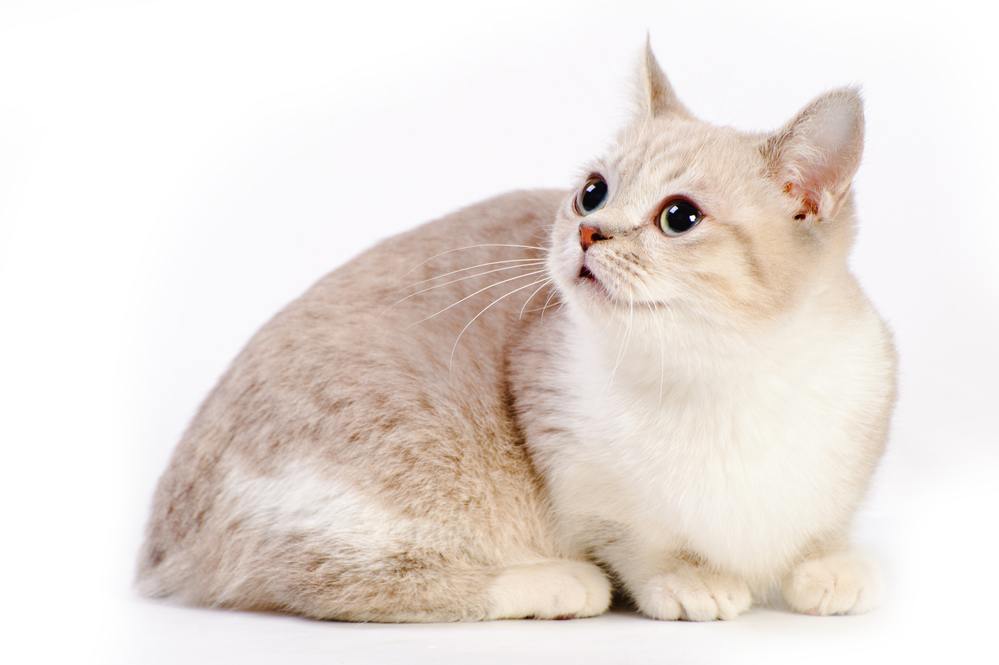 Another vertically challenged feline is the Munchkin. But don’t let its lack of height fool you. What this energetic cat lacks in stature, it makes up for in fun, affection and clownish traits. In fact, according to Vetstreet, the Munchkin is referred to as a magpie because of its love for all things shiny…hide those valuables! If that isn’t enough to sell you on the breed, it only grows from 5 to 9 pounds By grongar (Yin and Yang) [CC BY 2.0], via Wikimedia Commons

No big surprise that the Singapura is thought to have originated in Singapore from a street cat. However, don’t let its humble beginnings stop you from checking it out. This “pesky people cat,” has been described as being extroverted, curious, playful (but nondestructive) as well as insistent on lending a paw to everything you do. Plus, it stays small coming in at a full grown weight of 5 to 8 pounds.

If you are thinking about getting one of these lovable felines, be sure to do your research to get all the information on that particular breed. Once you have the details, it’s time to locate a rescue organization or a reputable breeder. Remember, every pet is a commitment and we owe it to them to be the best pet parent possible. However, with the right breed and lots of love you are sure to have a forever friend for the duration of its life.